My first day of college was anything but good. Bad is n understatement to how I felt. It was a Thursday. I had three classes that day. My first class, I walked in late. Everyone was staring at me. I felt so ashamed. To make matters worse, the only available seat was center front. I sat down. I was crying inside and felt like everyone was staring at me. I started hallucinating, hearing things like “Who does she think she is coming in late?” I couldn’t concentrate at all. Finally when I was able to concentrate and turn all my attention to the lecture going on in front of me, my phone started ringing.  “Great.” I thought. Again, everyone turned to me. I struggled to get the phone out of my bag and to shut it up. Finally, I did that. After that, it was another couple of minutes of hallucinations. The stares were like knives. I felt so uncomfortable. When the teacher dismissed class, was so relieved. It felt like a big boulder was lifted off me. My second class was not any better. I walked in on time. Everyone was staring. It was like I was the new kid. The teacher walked. During her lesson, everyone was engaging with each other. It was like the new each other. Then it hit me, I had missed a day of class. “Great.” I thought. Now, I’m not only behind, I’m also the new girl in class. At the end of this class, I wasn’t so relieved. I had to stay a little later so that the teacher can talk to me. Man, was I nervous. She handed me the syllabus and talked about the grading, the tests, and the final. The whole time, I was not able to concentrate on her words. I only heard little of everything. I walked out more confused. The last class was the worst. I went to the class to find that it had been moved to another class, all the way on the other side of campus. To make things worse, I didn’t know how to get back there. When I finally got there, class had been going on for half an hour. “Great.” I thought. “Now I’m the late one.” I took a seat in the front, near the window. It was not a pretty feeling. The teacher kept talking and talking, but I got nothing out of it. At the end of the day, I left college to return back home for the day, with nothing learned.

To those who have not had their first day of school, I offer you two important things to do. One, look at your schedule to see which classes you have on what days. It will really help with being one with the class and will prevent the “new student” feeling. Two, and most importantly, get a tour of your school BEFORE school starts. It will help in navigation. If you are not able to get a tour, look for your class ahead of time, on break or in between class. That way, you’ll know where you’re going before you go there. For those of you who have had first days like this, which I highly doubt, it’ll be okay. Things will improve. You’ll get to know the people in your class. Everything will be okay. 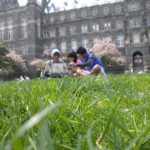 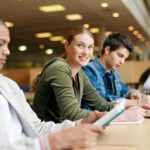 I was born and grew up in Liberia, a small country located on the west coast of Africa. At eight years old, my family and I had to relocate to America due to a severe civil war. It wasn't tough. I had my family with me who were going through the same thing. We all support each other. That was how we survived the different community, atmosphere, people, and culture.